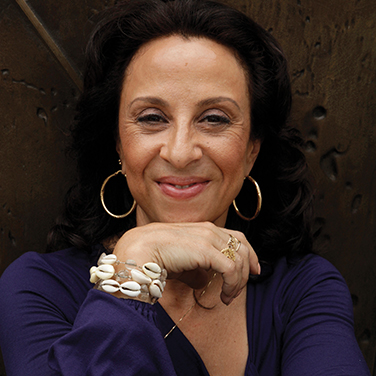 Maria Hinojosa is an award-winning news anchor and reporter who covers America’s untold stories and highlights today’s critical issues. As the anchor and executive producer of the Peabody Award-winning show “Latino USA,” which is distributed by NPR, and anchor and executive producer of the PBS show “America By The Numbers with Maria Hinojosa,” she has informed millions about the changing cultural and political landscape in America and abroad.

In April 2010, Hinojosa took a groundbreaking step by creating the Futuro Media Group, an independent nonprofit organization producing multimedia journalism that explores and gives a critical voice to the diversity of the American experience. Futuro Media is committed to telling stories often overlooked by mainstream media.

In nearly 30 years as a journalist, she has worked for CNN, PBS, CBS, WNBC and WGBH. Her previous projects include PBS’s “Need to Know” series and the WGBH/La Plaza talk show “Maria Hinojosa: One-on-One.” Hinojosa was the first Latina to anchor a “Frontline” report: aired in October 2011, “Lost in Detention” explored abuse at immigrant detention facilities, garnering attention from Capitol Hill and from both the mainstream and Spanish-language media.

Hinojosa has reported hundreds of important stories from the restrictive immigration policies in Fremont, Nebraska, to the effects of the oil boom in North Dakota, to stories of the poor in Alabama. As a reporter for NPR, Hinojosa was among the first to report on youth violence in urban communities on a national scale. During her eight years as CNN’s urban affairs correspondent, she often took viewers into communities rarely shown on television. Now on “America By The Numbers,” Hinojosa continues to bring attention to communities and issues usually ignored.

Hinojosa has received numerous awards for her work, including four Emmys, the 2012 John Chancellor Award for Excellence in Journalism, the Robert F. Kennedy Award for Reporting on the Disadvantaged, the Studs Terkel Community Media Award and the Edward R. Murrow Award from the Overseas Press Club for best documentary for her groundbreaking “Child Brides: Stolen Lives.”

In addition to her broadcast work, Hinojosa has been a weekly syndicated columnist for King Features/Hearst and is the author of two books: “Raising Raul: Adventures Raising Myself and My Son,” a motherhood memoir; and “Crews: Gang Members Talk with Maria Hinojosa,” an in-depth collection of interviews with gang members in New York City.

Hinojosa was born in Mexico City and raised in Chicago. She received her Bachelor’s Degree from Barnard College. She is currently the Sor Juana Inés de la Cruz Chair of Latin American and Latino Studies at DePaul University in Chicago and a Global Post “Voces” columnist. She lives with her husband, artist German Perez, and their son and daughter in Harlem.