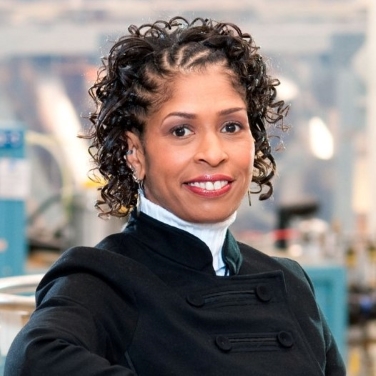 Aerospace engineer Dr. Aprille J. Ericsson’s career is distinguished by “firsts,” including being the first person of color to receive the Washington Award from the Western Society of Engineers. She is the first African-American female to receive a Ph.D. in mechanical engineering from Howard University (HU) and the first African-American female civil servant to earn an engineering Ph.D. at the NASA Goddard Space Flight Center (GSFC). There she currently serves as New Business lead for the Instrument Systems and Technology Division (ISTD).

During her 25-plus-year tenure with NASA, Ericsson has worked as aerospace engineer, technologist, project and program manager and executive. She has taught at Howard University, the University of Maryland and Bowie State University. Ericsson was named one of the top 50 minority women working in science and engineering fields by the National Technical Association, and she was ranked 8 of 20 on the 2016 list of the Most Powerful Women Engineers by Business Insider.

Ericsson was born in Brooklyn, New York. Raised in the projects of Bedford-Stuyvesant, she began her education being bussed to an elementary school in Brooklyn. “It didn’t take me long to realize I had an aptitude for mathematics and science,” she recalls. In her last year of junior high school, she won second place in the science fair. She passed all entrance exams for New York’s technical high schools, but decided, at age 15, to move to Cambridge, Mass., where she lived with her grandparents and attended the Cambridge School of Weston on scholarship. There, she continued to excel academically and was accepted into the Massachusetts Institute of Technology (MIT) Minority Introduction to Engineering, Entrepreneurship and Science program.

Ericsson coupled her early academics with extracurricular activities, including playing basketball and other sports. Throughout her life she has competed in basketball, flag football and softball. Her dedication to youth has continued as a basketball, softball, baseball and T-ball coach.

After graduating from high school, she attended MIT, where she earned a bachelor’s degree in aeronautical/astronautical engineering. During her time there, she was involved in several aerospace research projects and led the research for Manned Mars Mission crew systems for interplanetary vehicles for her senior project.

She earned her master’s and doctoral degrees at Howard University in Washington, D.C., where her research focused on developing practical design procedures for future orbiting space structures like the International Space Station.

As an attitude control systems specialist, Ericsson worked on satellite missions including the X-Ray Timing Explorer, the Tropical Rain Forest Measurement Mission and the Wilkerson Microwave Anisotropy Probe. Following those assignments, Ericsson was detailed to NASA Headquarters as a program executive for Earth science and a business executive for space science. She returned to Goddard for a long tenure as an instrument project manager, where she led spaceflight instrument teams and proposal developments for instruments ranging from $15 million to $500 million

She speaks to young people across the country – especially minorities and women – to encourage them to follow in her footsteps. “I feel obligated to spur the interest of youth, particularly minorities and females, in STEM.” she says. “Without diversity in these fields, the United States will not remain technically competitive.”

Ericsson has always pursued ambitious undertakings and has never shied away from aiming high. In fact, she lives by these words of Norman Vincent Peale: “Shoot for the moon. Even if you miss, you’ll land among the stars.”