Things got a bit messy at a STEAM event where kids previewed free Sally Ride Science workshops offered through the Library NExT program. But no worries – the mess was in the service of hands-on learning.

With San Diego Mayor Kevin Faulconer looking on, young guests tried out activities from some of the STEAM (science, technology, engineering, arts and math) workshops, which are held at city library branches. At one table, students used a mushy mixture of clay and sand to model sustainable dwellings. At another table, kids dropped Pop Rocks candy into soda to create a fizzy reaction that inflated a balloon. Students also got a chance to explore coding and 3-D printing.

The aim of the event on July 25 at Valencia Park/Malcolm X Library was to get out the word about the expansion of Library NExT – Network of Education x Training – a partnership between the San Diego Public Library and UC San Diego Extension Pre-College Programs.

Mayor Faulconer noted that Library NExT, which started in January 2017 as a small pilot program, will soon offer STEAM workshops for middle school and high school students in 15 libraries. “The goal is to grow this program to all 36 branch libraries,” he said.

“We are creating even more opportunities for young San Diegans to prepare for the high-tech jobs of the future,” Faulconer said. “And the best part is, these classes are completely free.”

Joining Faulconer at the STEAM event were:

Walshok stressed the importance of promoting STEAM literacy for today’s teens. “No matter what you choose to be, you are going to need to be able to work with computers and with advanced technology,” she said.

Abeyta noted that the Library NExT offerings represent a continuation of Ride’s legacy. “Her passion was education for the next generation,” he said. “Her mantra was, ‘You can’t be what you can’t see.’ ”

So far, more than 900 students have attended Library NExT classes. The free workshops cover subjects ranging from robotics and Python programming to the Science of Harry Potter and Physics of Fidget Spinners. The classes, usually from 3 to 4 hours long, are geared either to middle school or to high school students. See the summer schedule and register: https://www.sandiego.gov/librarynext.

Watch a video about the event from the San Diego Mayor’s Office: 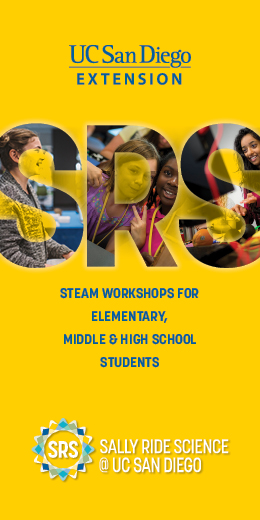